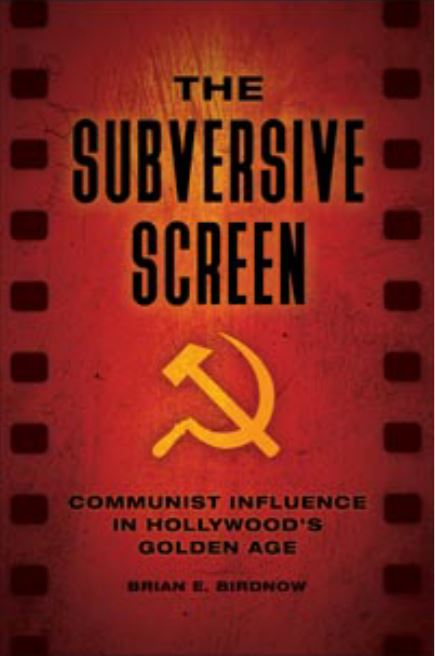 Soviet agents were able to move freely around the USA during the mid-to-later 1930s, a historian claims. From the Great Depression through World War II, the American Communist Party tried to take control of the motion picture industry. Otto Katz, who became the Comintern’s point man in Hollywood had been sent to America to murder Whittaker Chambers, before he proceeded to Hollywood. He didn’t accomplish the mission, but organizing a communist cell in Hollywood was a success.

The Subversive Screen: Communist Influence In Hollywood’s Golden Age explores the covert ways in which Hollywood Communists and Soviet sympathizers attempted to tailor movie scripts to suit the Soviet agenda.

What made you write this book? What was your motivation?

Regarding my motivations in writing The Subversive Screen: Communist Influence In Hollywood’s Golden Age the topic has always been an area of interest to me, and I have studied it, off and on, for many years.  I have written a volume on American communism, and I decided to write this volume to set the record straight, so to speak, since many studies of the Hollywood Communists have portrayed them as noble free-thinkers, set upon by malevolent forces intent upon destroying them, and loosing “McCarthyite” insanity across the land.  The truth is, of course, much more complex, and the role of the Hollywood Communists much more insidious than the standard view.  This volume will help to correct the record.

In your opinion, how successful was film as a propaganda tool in Hollywood’s Golden Age?

The use of film for propaganda purposes was something that Lenin, himself, had emphasized as early as 1919.  He grasped the potential that the cinema had for creating an approximation of “reality” and, if properly used and widely circulated, it would be the greatest mass medium in history.  The CPUSA (Communist Party United States of America) took orders from the Communist International (Comintern) in attempting to infiltrate the American motion picture industry, and to “capture the medium” for use against the established sociopolitical-economic system.  The effort of the Hollywood Communists was only partially successful, but this was not due to lack of effort or intent.

Did you find out some interesting information during your research?

During the research phase of the project I learned much that I had not known.  Most of the suppositions I had developed turned out to be true.   Other things that I had not expected proved to be very important, and quire chilling, too.  For instance, I did find out about how easily Soviet agents like Willi Munzenberg, Otto Katz, Louis Gibarti, and Gerhart Eisler, among others, were able to freely move around the USA during the mid-to-later 1930s, without hindrance or even difficulty.  Katz, who became the Comintern’s point man in Hollywood had been sent to America to murder Whittaker Chambers, before he proceeded to Hollywood.  He narrowly missed Chambers, but succeeded in organizing a communist cell in Hollywood.  Katz was also implicated in the murders of Willi Munzenberg, Trotsky, and Jan Masaryk, as well.  These intriguing nuggets of information, I did not know before!

Would you emphasize some events or situations that sparked controversy?

The fact that the biggest Hollywood production studios, Metro-Goldwyn-Mayer in particular, were producing movies that strongly seemed pro-communist, if not outright pro-Soviet in nature raised many eyebrows in the immediate postwar world.  Movie like Mission To Moscow, which celebrated the Russian fight against the Nazi invaders, and Song of Russia, which portrayed a collective farm set in the Western Ukraine as a veritable Garden of Eden, and lauded the “new world” created, presumably by Stalinist brute force.  In addition to these films, the political associations of a number of significant figures within the film community, mostly screenwriters, were now coming under question.  William (Billy) Wilkerson, who ran a daily trade newspaper called The Hollywood Reporter, named fifteen screenwriters as people with pro-Soviet convictions and CPUSA connections.  He offered them the front page of his newspaper to those he had charged, giving them the opportunity to deny or contest his accusation, and none of those named chose to respond.  This, and labor disorders at the main studios in 1946 led to a highly charged atmosphere developing in Hollywood.

In your opinion, what movies were the strongest propaganda tools? Can you give a few examples?

The main focus of communist recruitment in Hollywood was among the screenwriters, and the script analysts, not the “talent”, that is the actors, the singers, dancers and the rest.  CPUSA calculated that they stood to make converts through covert operations such as ladling propaganda into the movie scripts, and that this would be done by the writers, more than by the actors.  That does not mean, however, that the Party did not try to recruit actors and other performers, because they certainly did.  They did figure, however, that actors could help spread the message, but the best way to do this would be by placing the “message” into the movies.

How film was used for propaganda purposes? What was important? Plot, characters or something else?

The CPUSA bloc developed a highly structured method of putting their message into the movies.  John Howard Lawson, a highly acclaimed, and highly paid screenwriter, was known as the CPUSA leader among the Hollywood screenwriters.  Lawson, who held Party training sessions for his recruits, warned writers not to script full propaganda efforts, because the public would see these productions for what they were.  Also, the studios would eventually catch on, and kill the propaganda movies, while also firing the writers, as well.  Lawson said that instead of pure propaganda, the writers need to smuggle five minutes of communist party line into every movie they wrote, or produced.  Lawson also said that they were to portray certain types sympathetically, and others antagonistically.  For instance, Lawson said that writers must portray workers, ethnic and racial minorities, and rural people as good, while they were to portray moneyed classes, aristocrats, priests, and politicians as bad.  Lawson did prison time for contempt of Congress after the 1947 hearings in Washington.  He ended up his career as a Professor of Theater Arts at the very prestigious Stanford University.

Were there any covert operations the activists did?

The Hollywood Communists did not, for the most part, engage in covert activity, which, if illegal, would have jeopardized their freedom and certainly ended their movie careers.  Many of the Hollywood figures on all sides of the political spectrum served selflessly during the war, and some like Sterling Hayden actually lived lives that resembled a Hollywood script, or a nineteenth century dime novel.  For the most part, though, the Hollywood Communists preferred to operate stealthily, but within the law.

How strong the activists were? Why, in your opinion, were they so attracted to communism?

As for the “attraction” that communism offered to recruits, it is difficult to break this down.  Undoubtedly, as in the case of John Howard Lawson, Dalton Trumbo, and Lillian Hellman, they were ideologically driven, and the “true believers”, as Eric Hoffer would have called them.  There were many others who got involved rather innocently, when they were told that communism was trying to build a better world.  Most of these folks stayed the Party for a while, but dropped out, often when the nature of communism reared its ugly head.  Still, others were attracted to the cause when they realized that they had no friends, family or confidants in the business and membership provided them with ready-made friends, acquaintances, contacts, and associates of a sort.  In this sense the CPUSA essentially provided the many migrant workers who made up the second and third-tier contract players a family of their own.