Despite a lack of direct evidence, historians tend to agree that the Swedish King Inge the Elder (c. 1051-c. 1110) – devout son of the Christian King Stenkil – destroyed the legendary Viking temple at Uppsala sometime in the 1080s. This consensus is based on events surrounding his life and feud with his brother-in-law Blot-Sven – otherwise known as Sweyn the Sacrificer. This feud was written in the thirteenth-century Saga of Hervar and King Heidrek (Hervarar saga ok Heiðreks) – a text which chronicles the fabled wars between the Goths and Huns.

A description of the temple is found in Adam of Bremen’s eleventh-century work Gesta Hammaburgensis ecclesiae pontificum (Deeds of the Bishops of Hamburg), yet the historian Lesley Abrams notes that there are scant reliable sources for conversion history in Scandinavia, and the texts written in the twelfth and thirteenth centuries served “contemporary purposes; even Adam of Bremen’s Gesta… written in the 1070’s, is a work of propaganda.”[1] Although it is difficult to corroborate events based on medieval texts written long after events occurred, they nevertheless depict the Christianization of pagan holdouts in the Viking world. Inge’s destruction of the Uppsala temple (whenever it occurred) is therefore a milestone in that history.

In additional notes of his translation of the thirteenth-century Heimskringla, Orkney native Samuel Laing wrote in the nineteenth century that Adam of Bremen’s account of the temple – which was motivated by his desire to ensure the Archbishropic of Hamburg-Bremen maintained ecclesiastical-imperial control over the Scandinavian kingdoms – exhibited a “rude idea of the Trinity. It had three idols, he says, of which that of Thor was in the middle and on the highest throne, and those of Odin and Frigg on either side.”[2] Keeping the papal perspective of the German chronicler in mind, his description of the “Ubsola” temple provides an insightful cultural contrast between Christian and pagan worlds:

Birca is a town of the Goths, situated in the middle of Suevonia, not far from that temple, which the Swedes hold very famous in the worship of their gods, called Ubsola; in which place a certain bay of that strait, which is called Baltic or barbarian, advancing to the northward, makes a harbor desirable to the barbarian nations… To all their gods, therefore, they have priests assigned to offer sacrifices to the people. If pestilence and famine are threatening, Thor is the idol…, if war, Wodani, if there should be a wedding to be celebrated, Fricconi. … since it is the custom to appease the gods by blood, and the bodies are hung in a grove… next to the temple, for this grove is so sacred… that its individual trees are believed to be divine from the death or gore of those who have been sacrificed.[3]

The end of the Saga of Hervar and King Heidrek illuminates the story of Inge and the rivalry with his brother-in-law Sven. Although his father Stenkil was tolerant of the old ways, Inge was much less so, and “sought to scatter the idol sacrifices in Sweden, and commanded all the people to accept Christianity; but the Swedes had too much faith in the pagan gods, and clung to the old customs.”

As a result, Inge was accused of violating “the old laws of the country” and at a Thing (assembly) was told to “abide by the old laws, or to resign the royal dignity.” When Inge refused to “reject the true faith, the Swedes shouted, gored him with stones and drove him away from the Thing.” Inge went west in exile in Västergötland (West Gotland), and Sven saw an opportunity in supporting a resumption of the blóts – or blood sacrifices:

Sven, the king’s brother-in-law, who had remained at the Thing, now offered the Swedes to make sacrifices for them, if they would confer on him the kingship; they all confirmed this, and Sven was thus made king over all of Sweden. Now a horse was brought to the Thing; this was slaughtered and chopped to pieces to spice, but with the blood they contemplated the sacrificial trees (the idols). Now all the Swedes rejected Christianity, and the sacrifices began again; with King Ingi driven out… Blot-Sven was the King of the Swedes for three winters.

In the saga, Inge returned to seek revenge upon his brother-in-law. With a group of warriors, he surprised Sven while in a house, set it on fire, and killed him as he came out. In doing so, he seized “Sweden and again aided Christianity…” Soon after the temple at Uppsala was destroyed. In keeping with his legendary name, the devout son of Stenkil “ruled the kingdom until the day of his death and died on the cot.”[4]

[2] Samuel Laing, The Heimskringla or the Sagas of the Norse Kings from the Icelandic of Snorre Sturlason, Vol. 3(New York: Scribner & Welford, 1889), 361.

[4] Niels Matthias Peterson, Hervarar saga ok Heiðreks konungs [Saga of Hervar and King Heidrek] (Copenhagen: Berling Brothers Printing, 1847), 58-60. See: Samuel Laing, The Heimskringla, Vol. 4, 155. “At that time there were many people all around in the Swedish dominions who were heathens, and many were bad Christians; for there were some of the kings who renounced Christianity, and continued heathen sacrifices, as Blotsvein, and afterwards Eirik Arsale, had done.” See also: Lesley Abrams, “The Anglo-Saxons and the Christianization of Scandinavia,” 238. “In 1080 [Pope] Gregory [VII] asked Inge I, a king of the Swedes, to send his bishop to Rome to brief the papal see on Swedish conditions; Gregory was delighted, he wrote, to hear that missionaries were spreading the faith among the Swedish people…” 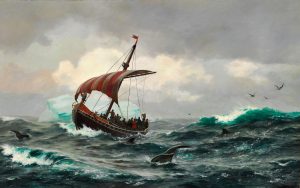 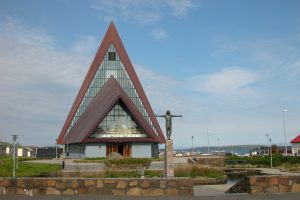 Next post The Cursed Ring of Sigmundr Brestisson, Viking Chief of the Faroes, 961-1005