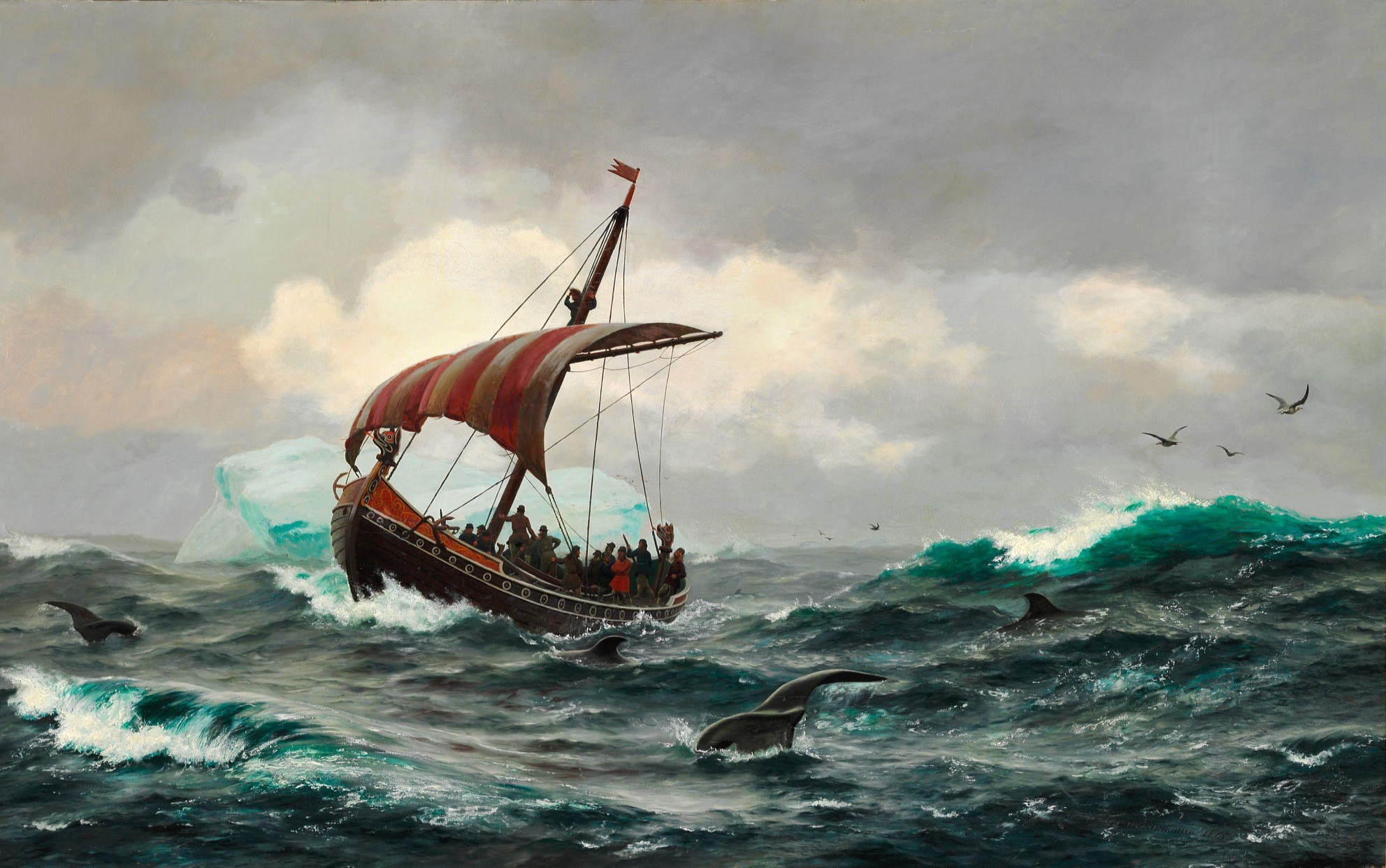 Summer in the Greenland coast circa year 1000 by Carl Rasmussen, 1874

During her lifetime Gudrid Thorbjarnardottir (Guðríður Þorbjarnardóttir, 980-1050), the daughter of Icelandic chieftain, Thorbjorn of Laugarbrekka, Iceland, travelled to Greenland, North America, Norway, and perhaps even Rome as a pilgrim.

Legend has it her father would not permit her to marry an early suitor because he was the son of a slave. She outlived two or three husbands. Not only did this intrepid woman travel the frontier of the Viking world, she gave birth to the first European on North American soil – Snorri Thorfinnsson. This globetrotting activity was recorded in the Saga of Erik the Red, Saga of the Greenlanders, the Heimskringla, and Vinland Saga. According to her biographer, Nancy M. Brown, when Gudrid embarked for unknown lands off the coast of North America “She was nineteen, newlywed for the second or third time and pregnant for the first.” In the course of her life, Gudrid crossed the frigid North Atlantic eight times.[1]

Iceland to Greenland with Erik the Red

Erik the Red was born on the western coast of Norway but at an early age his father Thorvald Asvaldsson was exiled from his homeland and sailed west with his family to Iceland. In 982, when Erik was in his early thirties, he too was banished (for three years) after a dispute with a neighbor turned deadly – and sailed west like his father before him.

When he returned to Iceland, he encouraged others to settle the lands he had found. For this reason, he is known for colonizing Greenland. Erik had four children (most likely) born in Iceland: Leif Erickson, Thorvald, Thorstein, and a daughter Freydis. According to the Saga of Erik the Red, Gudrid and her father accompanied Erik to Greenland. Soon after, Erik’s youngest son Thorstein “began wooing Gudrid,” – a union agreeable to both fathers. “The marriage was also arranged, so that Thorstein went to take possession of his bride, and the bridal feast was held at Brattahlid in the autumn. The banquet went off well, and was numerously attended.” However, the celebration was brief, as Thorstein passed away from an illness that spread throughout the colony. When Gudrid’s father Thorbjorn died a short time later “The whole property then went to Gudrid. Eirik received her into his household, and looked well after her stores.”[2]

News of the discovery obviously intrigued Greenland’s new arrivals like Thorfinn Karlsefni, an Icelandic merchant from Iceland’s northern Skagafjord. “Karlsefni was a man of good family, and very rich. His mother’s name was Thorun. He engaged in trading journeys, and seemed a goodly, bold, and gallant traveller.” When Karlsefni arrived in Greenland he offered Gudrid “to take such of the merchandise as she wished, and Eirik displayed on his part much magnificence in return, inasmuch as he invited… [Karlsefni] to pass the winter in Brattahlid” – Erik’s estate in southwestern Greenland. That Christmas, Karlsefni…

…broached to Eirik the subject of a marriage with Gudrid, which he thought might be under Eirik’s control, and the woman appeared to him to be both beautiful and of excellent understanding. Eirik answered and said, that for his part he would willingly undertake his suit, and said, moreover, that she was worthy of a good match. It is also likely, he thought, that she will be following out her destiny…

When the weather warmed, the two newlyweds and one hundred and sixty settlers (mostly men), set sail to Vinland by way of Baffin Island – which the Vikings called “Helluland” (“stone-land” or Slab Land). From there they headed south past Labrador (“Markland”) towards Leif Erickson’s settlement in Newfoundland.[3] According to the Heimskringla it was at Vinland that Gudrid gave birth to Snorri. Life on the settlement for the newcomers was difficult but things became more serious after cordial trade relations with Native Americans – which the Vikings called “Skrælings” – deteriorated into violence after Karlsefni “forbade his men to sell [them] weapons.” Three years after Snorri was born, Gudrid and her family abandoned the colony and returned to Iceland. Sometime after that, the couple ventured to Norway where their sold their “wares” and returned to Iceland to build an estate at Glaumbaer (“Glaumbajarland”) in the area south of Skagafjord:

When Karlsefne died Gudrid took the management of his estate, and Snorre her son, who was born in Vinland. And when Snorre was married Gudrid went out of the country, and went to the south and came back again to Snorre’s estate, and he had built a church at Glamba. Afterwards Gudrid became a nun, and lived a hermit-life, and did so as long as she lived.[4]

Based on the Saga of the Greenlanders, Gudrid’s biographer Nancy M. Brown writes that after Thorfinn’s death it is possible Gudrid made a pilgrimage to Rome. Although Brown concedes there is “no corroborating record” of her voyage, she notes that “the guestbooks in monasteries along the recommended route list other women travelers with Viking names: Vigdis, Vilborg, Kolthera, and Thurid, for instance visited Reichenau monastery in Switzerland during the eleventh century…” Given the rugged and adventurous life Gudrid lived, there is little doubt that the daring voyager to the New World could make the relatively easy overland journey to Rome. “That Gudrid might have gone to Rome is therefore plausible, but not certain.”[5] Regardless, Erik the Red knew of what he spoke, and was correct that she would be following out her destiny as a pioneer and most-travelled woman of the medieval world.

[4] Samuel Laing, The Heimskringla or the Sagas of the Norse Kings from the Icelandic of Snorre Sturlason, Vol. 2(New York: Scribner & Welford, 1889), 241-7. In the Heimskringla the Vinland endeavor is attributed to Gudrid: “Thorfin Karlsefne was a man of great wealth, and was in Brattahlid with Leif Eirikson. Soon he fell in love with Gudrid and courted her, and she referred to Leif to answer for her. Afterwards she was betrothed to him, and their wedding was held the same winter. At this time, as before, much was spoken about a Vinland voyage; and both Gudrid and others persuaded Karlsefne much to that expedition.” (Ibid. 241) 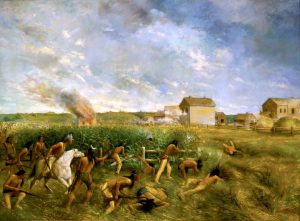 Next post Inge the Elder Destroys the Temple at Uppsala